"THERE'S A CAT IN A BOX in Cambridge Massachusetts."

From our friend Adam Felber's fine novel "Schrodinger''s Ball" (Random House $13.95 and signed copies are available).
Part Schrodinger, part Joyce, part Robbins and part his own, this novel follows four friends through a fateful weekend, where love is found, friendship is honored and hope prevails. There is a great Rube Goldberg climax with illustration that explains all. And the cat survives. Or does he? You'll have to open the book to find out.
Adam is also the nicest guy in Show Business.
Some of you know this all ready. Adam is a regular panelist on NPR's Wait, Wait, Don't Tell Me! He is also now a writer on Bill Maher's Real Time on HBO. His mom writes great regency romances. His sister is on CourtTV. What a family.

I recommend his novel whole-heartedly. It is a great read, a fun romp, a splendid time is guaranteed for all.
Posted by SeattleDan at 9:27 PM 1 comment:

Inspired by a music thread from last week that was posted by our friend, Patriotboy at Jesus’ General, I would like to know what your favorite first lines from literature (poetry, fiction, belle letteres) is. Don’t be shy. “Call me Ishmael”, “Marley was dead”, “It was a bright cold day in April, and the clocks were striking thirteen”. Whatever may strike you as good.
Posted by SeattleDan at 7:56 PM 17 comments:

New Books for this Week!

Bill Clinton has penned Giving: How Each of Us Can Change the World (Knopf $24.95). The former President draws upon his many travels, and his service, to give many examples of how ordinary people can make a difference. Giving is described as an inspired call to action. He made an appearance today on Oprah.

Sebastian Faulks, the author of Birdsong and On Green Dolphin Street, has a new novel, Engleby (Doubleday $24.95), a first person narrative, who may or may not be deceiving us about his involvement in the disappearance of his classmate.

Widely admired Edwidge Danticat’s new memoir, Brother, I’m Dying (Knopf $23.95), describes the relationship of her father and her Uncle Joe, a Haitian preacher, who is forced to abandonHaiti, only to run into roadblocks from the U.S. Government.

Ira Flatow, host of NPR’s Science Friday, has delivered Present at the Future: From Evolution to Nanotechnology, Candid and Controversial Conversations on Science and Nature (Collins $24.95). I think the title says it all!

Tree of Smoke (Farrar, Straus, Giroux $27.00), the new novel about Vietnam by Denis Johnson, received a rave review in this week’s New York Times Sunday Book Review, as well as by NPR’s Alan Cheuse on today’s All Things Considered.


Where's your bookmark?
Posted by SeattleDan at 6:52 PM No comments:

Pike Place Market has been celebrating its 100th Anniversary, and the stories bubbling up have reminded me of my first visit. It was 1976, probably in the spring. My girlfriend April and I had traveled up I-5 to spend the day in the city, and then take in a concert. We had paid good money for these tickets, my stub says $6.50, so this wasn't one of those "Catch a Rising Star" concerts that came later. Those usually cost $3.50 to see Nina Hagen, Talking Heads, Elvis Costello, DEVO or Blondie, or any of the hundred or so other acts I'd later attend.

We drove up in the morning, and started out in Pioneer Square. It was a much rougher Pioneer Square than the one I work in now, but we seemed to meet only the most delightful of its denizens. We wandered through antique shops and a bookstore, that I must assume was David Ishii's, but I really don't remember.

That afternoon we prowled the Market. We bought strawberries and bread and cheese for lunch. We saw Baby Gramps singing The Teddy Bears' Picnic on a street corner. We explored the lower levels and after a few stores we came upon the Pearl Guy. He was a grandfatherly little Japanese guy, with a waterproof apron on and a green visor over his eyes. I don't remember the name of his store, but he sold oysters for five bucks to tourists, who then cracked them open to see if they were lucky enough to find a pearl in their bivalve. As we peered into his salt-water tanks, he must have decided these two girls were not marks. It was a slow afternoon and he had nothing better to do. He spent at least an hour, explaining how pearls are formed and how to see a flaw in a pearl, and how to touch a pearl to your front tooth to judge its authenticity. He reached into the tank and pulled out two oysters, handing us each one. "Good Luck! See if you got a pearl!" We used his stubby little paring knives to pry apart our oysters, and, amazingly we both got pearls on the first try. He congratulated us and told "Well these pearls do have small flaws, but still they are real pearls. Now, when you are old enough to buy pearls, you will never settle for imitations!"

A couple of years later, I did a lost wax carving for a ring setting, and someday I will have it cast. I still haven't bought my pearls, but when I do, they will be good ones.

The rest of the day was equally wonderful, and Tom Waits did put on a really good show, but the memory that makes me smile to this day is the kindly pearl guy and my pearl. 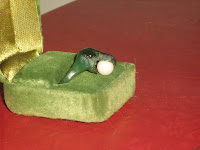