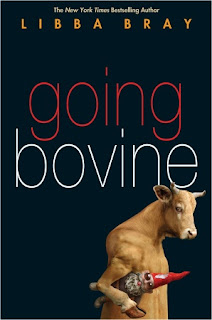 If you know Libba Bray from her Gemma Doyle trilogy, you may be in for a surprise here. Going Bovine (Delacourte, $17.99)

16 year old Cameron just wants to get out of high school, with as little effort as possible. When he is diagnosed with Creutzfeldt-Jakob disease, even that is out. Once regarded as a loser, now his classmates are eager to show their love and support at a Student Rally. As he lies in the hospital visitors drop by and give him advice, pray for his soul and play video games.

Dulcie has stopped by with a challenge, follow the feather clues to find Dr. X who may have a cure, and close the wormhole in the space-time continuim to save the world, and bring back the greatest Inuit rock band of all time, The Copenhagen Interpretation. Dulcie is a cute, pixie faced punk with the softest of wings. Or is she another hallucination?

Cameron talks fellow schoolmate Gonzo, a hypochondriac dwarf, into accompanying him on the trip and they are off to Disney World! Along the way they'll pick up a Garden Gnome who is actually the embodiment of the Norse god Balder and really resents being hauled around the world posing for vacation pictures. There's a detour to Party House!, YA TV's annual spring break televised humiliation fest to rescue Balder, who has been kidnapped by frat boys who want to pose with him in front of, what else, tourist attractions.

This wild ride has everything! Mad Cow disease, String Theory, Hallucinations, Road Trips, the Haldron Collider, the Higgs Field, Snow Globes, Jazz and Don Quixote. It asks the eternal question: "Why does micro-wave popcorn taste so good?" It's not going to end well for Cameron, but Libba is honest with her readers and finishes the book on a hopeful, lovely theme. I do recommend this for a mature teen reader, simply for the honesty with which the real life topics are addressed, but as a parent I can tell you there is nothing here a 15 yo doesn't already know about.

If you can't trust an author in a cow suit, who can you trust?

Another cool thing I found while researching this book is the blog LargeHeartedBoy, which asks authors for the playlist they listen to while writing.

As a bookseller, I would be remiss not to point you at the Literary Review's annual Bad Sex Award. On a shortlist of 10, singer Nick Cave was picked for his second novel The Death of Bunny Munro, about a sex-obsessed door-to-door salesman. "Frankly we would have been offended if he wasn't shortlisted," said Anna Frame at his publisher Canongate.

Read these if you dare:
Paul Theroux for A Dead Hand

Nick Cave for The Death of Bunny Munro

Philip Roth for The Humbling

Jonathan Littell for The Kindly Ones

John Banville for The Infinities

Anthony Quinn for The Rescue Man

Sanjida O'Connell for The Naked Name of Love