Way to go Aberdeen. The world is laughing at you. Again. 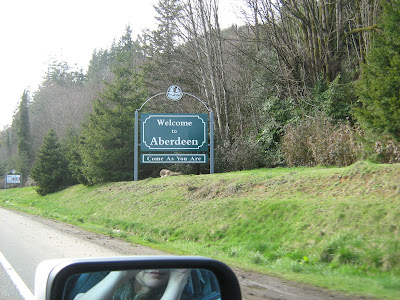 A few years back, there was controversy as to whether to City Council should attach the words "Come as you are" to the Welcome to Aberdeen sign. After obtaining a $125,000 grant, the old sign with a bullet hole was replaced.

Earlier this week, the local rag ran a piece which sparked more controversy, even though most folks were able to take the message in stride. Local, private citizens have been working for years to clean up the patch next to the bridge Cobain slept under in his early years, without any public funding and create a park and memorial in Cobain's hometown.

A few days ago, Toledo mom Hayley Rogers brought her 16-year-old son Kenneth Plandel and his friend Sia Stone, also 16, to the park. They were using a map in the back of Charles R.. Cross’ book “Cobain Unseen” to look at Cobain-related sites around the Harbor.

“The phrase doesn’t bother me,” Rogers said. “It’s straight forward and that’s what kids need to hear. And it’s true. Drugs are bad for you and that’s exactly what it will do to you. That’s what it did to Kurt. It’s not offensive to me. I don’t talk like that. I don’t use that word. But it doesn’t bother me to see that here because that was him.”

Drugs are bad for you. They will fuck you up. 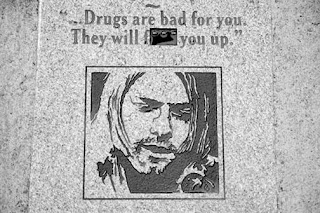 It was reported the city council would discuss the issue at it's next meeting in about a week. That wasn't good enough for Aberdeen City Councilwoman Kathy Holder.

A sandblasting crew has added dashes to a Kurt Cobain quote on a memorial stone to censor its potentially offensive language after it sparked widespread controversy.

Aberdeen City Councilwoman Kathy Hoder said she took it upon herself to convince Kovach to censor the word after becoming fed up with the controversy.

“I’ll take all the blame,” she said this morning.

Now media sources around the world are mocking the town of Aberdeen for it's small-minded ignorance of its most famous local son. The paper's Editor, Dan Jackson has a good perspective on this, but cooler heads were not able to deter Holder from imposing her censorship on a piece of marble. She had the quote sand-blasted within 3 days of it's placement. I hope she will enjoy being known as the totalitarian art critic and former City Councilwoman.

Or, as Novoselic puts it, “The people who erected it want to convey the message that drug abuse is bad for you. And it’s the truth. … Using the F-word on a granite marker may be striking, but considering contemporary mores, it’s not challenging.”

It may not be challenging in the larger world, but in this small town it cannot be tolerated.