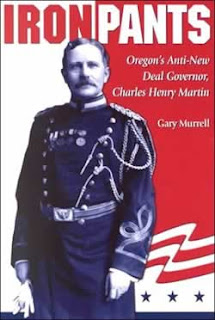 Gary Murrell, Professor of History at Grays Harbor College (and in full disclosure someone both SeattleTammy and I have met on a couple of occasions), has written a fascinating study of the life of the Depression Era politician, Iron Pants: Oregon's New Deal Governor, Charles Henry Martin (Washington State University Press, $20.00). Martin was a man of his times. Having attended West Point, he served a 40 year career in the US Army, and was stationed in many of the hot spots in our history, among them, the Philippines, China during the Boxer Rebellion, as well as World War 1. He "led" the all-black Ninety-Second Division after that war, and finally retired as a major general after commanding the Panama Canal Zone in 1927. Martin then turned his attention to politics, serving as a Democrat in Oregon's congressional delegation from 1931-1935, and then elected as Oregon's governor in 1934 during a three-person race.

During the campaign for governor, Martin gave lip-service to President Roosevelt and to the New Deal, but once he was in office, Martin's stances as a "Hoover Democrat" emerged. He opposed Social Security, Public ownership of power ( a huge issue with Oregon's new Bonneville Dam and the power of the Columbia River), relief for the destitute (he claimed in 1936 that the Depression was over in Oregon), and, above all, he hated the Labor Unions and the burgeoning Labor Movement. He went so far as to set-up "Red Squads" to bust the unions which he believed were more or less communist inspired. As Governor, he faced a movement to recall him (which never got to a ballot), and lost the Democratic primary in 1938 for re-election. He became an active supporter for the Republican candidate that year.

A military man, he held strong opinions. Although he commanded black troops during the time of Jim Crow, he believed "...the negro is of very little importance...the average negro is by no means equal to the average white man...". H wrote one friend that if a national Old Age Pension were to be adopted, that in the South, "...an old Colored fellow and his wife getting $400.00 a month. All the people in the neighborhood would live off them and all work would stop." He believed that Roosevelt's Secretary of Labor, Frances Perkins, was the head "red". Viewing the political situation across the Columbia in Washington state, he wrote, "That state is too much influenced by Seattle, which sad to say early became a dumping point for the refuse of Alaska and the Orient", concluding that "Seattle is today Russian territory". In order to help balance the Oregon budget, he supported a plan to chloroform the "aged and feeble-minded wards of the state". As for striking workers, he instructed the state sheriffs to "beat the Hell out of 'em" and "crack their damn heads". Nice guy, no?

Although an academic study, Murrell writes with great ease and lucidity for the general audience. He provides a great deal of context for Martin and his times, giving much background for American imperial designs during the Governor's military service in the Philippines and China. His career is instructive and resonates today with such luminary reactionary governors now installed in Wisconsin, Michigan, Ohio and Florida. The book is available at (Jackson Street) Books On 7th andfine Independent bookstores everywhere. Visit us on Facebook Jackson Street Books.
Posted by SeattleDan at 9:31 AM 1 comment: