We've posted this here the past two years, and, of course, it holds up this year...and will again next year. Want and ignorance remain with us. There are so many people out of work, or just trying to make ends meet that their holiday isn't gonna be all that great. An Austerity Christmas for many, if any at all. And ignorance? Just look at the news. 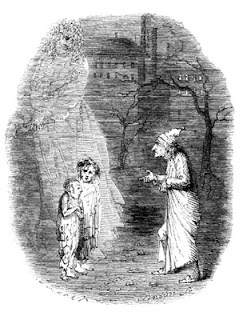 Les Standiford has a timely book out just now, The Man Who Invented Christmas: How Charles Dickens's A Christmas Carol Rescued His Career and Revived Our Holiday Spirits (Crown Publishing, $19.95) NPR has an excellent excerpt in their Indie Bookseller's Round-up.

As always, lovely books can be found at your favorite independent bookstore. Book orders can be placed 24 hours a day at Jackson Street Books.
Posted by SeattleDan at 11:58 PM No comments: