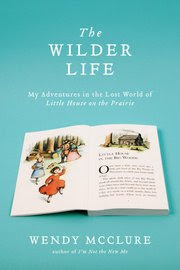 The Wilder Life: My Adventures in the Lost World of Little House on the Prairie, by Wendy McClure (Riverhead, $25.95) She had me at the opening sentence:

I was born in 1867 in a log cabin in Wisconsin and maybe you were, too.

Why, yes I was! I was immediately charmed by the cover of this book, and, to see it was by one of my favorite BUST columnists, well.

The Wilder Life is a most entertaining history of the American West. Wendy McClure sets out for her "year on the Prairie" after her mother's death reunites her with the yellow spined paperbacks of her childhood. The Little House on the Prairie ( or, LHOP, as it were) series was dear to my heart while I was growing up on the farm. I had my bonnet, and calico dress for the Yelm Prairie Days Parade. When I saw this book: I was so there! Transported entirely. I am of the book generation of the Laura World, not the television version. Wendy was too, because, as she explains: "It was up against WKRP, and Holy Howard Hesseman, that show was funny!"

This bright, humorous travelogue took me to all the places I've only imagined before. Wendy tracks down the houses and museums that have sprung up at the original home sites. It's here she meets other Laura devotees and learns there is a home schooling curriculum. The LHOP books are also being used for inspiration by survivalists. And here's something I hadn't known: in her later life, Rose Wilder Lane would become one of the founders of the early Libertarian movement, and indeed the first use of the term "Libertarian" is credited to her in 1947(!). After growing up in poverty, she considered herself a Communist, but a trip to Russia changed her views (in some logic I still don't quite follow). Rose was befriended by Roger MacBride, and willed all her belongings to him, including the valuable copyrights to all the LHOP works. It was the Libertarians who franchised it to the television series.

Warning! 27 minute video from the avclub (the narrator sounds as if he went to the Troy McClure school of dictation, but you'll wish they had gotten the real Troy McClure to read this).

I do enjoy this sort of personal memoir, and this one is funny and irreverent while still holding a great deal of affection for the LHOP Laura World. You certainly don't need to be a Bonnethead to enjoy this, but if you are, this book is a real treat.

The Wilder Life is available at (Jackson Street) Books On 7th and fine Independent bookstores everywhere. Visit us on Facebook Jackson Street Books.

**I do want to send a virtual Thank You to Donna, long-time member of the Troops, for the box of books for the store. Much appreciated!
Posted by Tammy at 7:38 AM 1 comment: