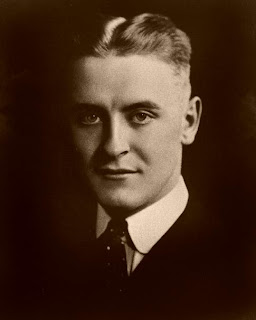 "Poor Scott Fitzgerald", the protagonist of Hemingway's The Snows of Kilimanjaro muses. "Poor son of a bitch", Dorothy Parker muttered at Fitzgerald's funeral. There is something to the epithet. Pathos permeated both his life and his writings. Of the four great American authors of the first half of the 20th century, Fitzgerald lived a much shorter life, dying in Hollywood at age 44 in 1940.

There is still much to admire in his work. He was obsessed with the rich. I think we can all remember his famous quotes: "The rich get rich and the poor get...children"; "Let me tell you about the very rich. They are different from you and me". His novels, This Side of Paradise, The Beautiful and the Damned", The Great Gatsby, Tender is the Night and The Love of the Last Tycoon, all deal in some way with the rich and the privileged. And his novels describe the corrosive effects wealth has on its holders. Fitzgerald, who was always short of money, had insight and wrote well about them. It is true of Nicole and Dick Diver (who were modeled on Sara and Gerald Murphy, American ex-pats in Paris who also figure in the film-bio pic De-Lovely, the recent picture about Cole Porter). It is true of Jay Gatsby who says, "Can't repeat the past?...of course you can!", who pathetically is murdered in a case of mistaken identity.

But even more so, Fitzgerald was able to create art from his times. He was the author of the phrase Jazz Age, and was its main portrayer. And, oddly, none of this translated particularly well to the screen Both film versions of Gatsby were not great. And the latter one not only starred Robert Redford, but had a screenplay by Francis Ford Coppola and directed by the fine Jack Clayton. Perhaps, it is irony at work. Fitzgerald worked in Hollywood the last years of his life and never had one of his screenplays produced. (Checking the Imdb, apparently a remake of Gatsby is in the works for next year; perhaps this one will have better luck).

That Fitzgerald is not held in the greatest regard these days probably has to do with his obsession with the rich. Reading him superficially can be like watching an episode of Lifestyles of the Rich and Famous. I would tend to agree with that assessment, but there are things worth reviewing. His own view of himself at the time Gatsby was published was that he was a magician with words. And there are flashes of that. Even Andy Kaufman agreed! Maybe he was wrong, Maybe there are second acts in American Lives.