Department of Books Reports: The Paranoid Style in American Politics

In the wake of the nomination of Barry Goldwater for President by the GOP in 1964, and at what was probably the height of the influence of the John Birch Society as an organization, American historian Richard Hofstadter wrote this magnificent essay for Harper's Magazine. It is well worth reading and has been collected in book form as "The Paranoid Style in American Politics and Other Essays" (Vintage Books $15.95).

He begins by stating:

"American politics has often been an arena for angry minds. In recent years we have seen angry minds at work mainly among extreme right-wingers, who have now demonstrated in the Goldwater movement how much political leverage can be got out of the animosities and passions of a small minority. But behind this I believe there is a style of mind that is far from new and that is not necessarily right-wing. I call it the paranoid style simply because no other word adequately evokes the sense of heated exaggeration, suspiciousness, and conspiratorial fantasy that I have in mind."

Hofstadter goes on to define the Paranoid style:

"The paranoid spokesman sees the fate of conspiracy in apocalyptic terms — he traffics in the birth and death of whole worlds, whole political orders, whole systems of human values. He is always manning the barricades of civilization... he does not see social conflict as something to be mediated and compromised, in the manner of the working politician. Since what is at stake is always a conflict between absolute good and absolute evil, what is necessary is not compromise but the will to fight things out to a finish. Since the enemy is thought of as being totally evil and totally unappeasable, he must be totally eliminated — if not from the world, at least from the theatre of operations to which the paranoid directs his attention. This demand for total triumph leads to the formulation of hopelessly unrealistic goals, and since these goals are not even remotely attainable, failure constantly heightens the paranoid’s sense of frustration. Even partial success leaves him with the same feeling of powerlessness with which he began, and this in turn only strengthens his awareness of the vast and terrifying quality of the enemy he opposes."

"The enemy is clearly delineated: he is a perfect model of malice, a kind of amoral superman—sinister, ubiquitous, powerful, cruel, sensual, luxury-loving. Unlike the rest of us, the enemy is not caught in the toils of the vast mechanism of history, himself a victim of his past, his desires, his limitations. He wills, indeed he manufactures, the mechanism of history, or tries to deflect the normal course of history in an evil way. He makes crises, starts runs on banks, causes depressions, manufactures disasters, and then enjoys and profits from the misery he has produced. The paranoid’s interpretation of history is distinctly personal: decisive events are not taken as part of the stream of history, but as the consequences of someone’s will. Very often the enemy is held to possess some especially effective source of power: he controls the press; he has unlimited funds; he has a new secret for influencing the mind (brainwashing); he has a special technique for seduction (the Catholic confessional)." 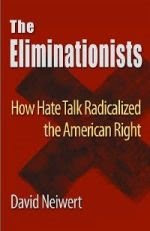 Resonant, no? And from 1964 it only looks worse. Once again I can highly recommend Dave Neiwert's The Eliminationists, which I discussed here.

So why am I bringing this up? Well, for my next few reports, I want to examine some fictional works, and their film adaptations from the 1960's as well as some more contemporary works that involve the "paranoid style" and what those works said about us as a people then, and what they may say about us now. I'm thinking of such books as Fletcher Knebel and Charles Bailey's "Seven Days in May", Eugene Burdick and Harvey Wheeler's "Fail-Safe" (and possibly their other novel from 1958, "The Ugly American"), Peter George's "Red Alert" (filmed by Stanley Kubrick as "Dr. Strangelove...." and Philip K. Dick's "Do Androids Dream of Electric Sheep", among others. And this is where you gentlefolk can help me. I'd like to hear your suggestions. Feel free to put them into the comments section. I think we can have a fruitful and, fun, discussion.

In the meantime, I still have not seen the long-awaited cookbook by democommie. And I'm getting hungry.