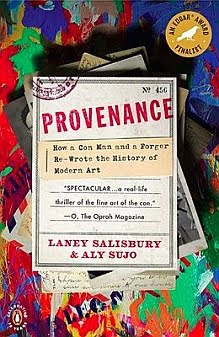 Provenance, How a Con Man and a Forger Rewrote the History of Modern Art, by Laney Salisbury and Aly Sujo (Penguin $16.00 & $9.00 used HC) This is a fascinating look into the world of modern art and the archives that enable art galleries and museums to authenticate paintings. It really gives you a great history lesson while being a very readable art thriller.

John Myatt was a struggling single father artist who had advertised his "authentic fakes" in want ads, where he was noticed by John Drewe. Drewe is the ultimate chameleon scammer, able to spin out a story that convinced many of the art conservatories to allow him access to their records, the provenance that verifies a painting from the artist and a paintings subsequent owners. These libraries were closely guarded to prevent records from being taken, but there were no protections from records being inserted into them to prove the origins of the some 200 paintings Myatt eventually produced for Drewe.

Drewe became a skilled forger in his own right, faking sales receipts and catalogs. While some archivists noticed some anomalies, they were unable to bring a definitive case to the police. It was Drewe's spurned ex-wife who brought the police evidence that could bring the scam to light.

Ultimately, Drewe served 4 years of a 6 year sentence and Myatt less than a year. Drewe maintains his innocence to this day, in ever-increasing elaborate tales of conspiracies. Myatt was sentenced to far less time for his mostly un-witting contributions. Myatt vowed to never paint again, but resumed his Authentic Fakes art business at the prompting of one of the Scotland Yard detectives, producing paintings that are clearly marked as "fakes" and even had a BBC series explaining art forgeries.

Illustrations would have really helped this book, but Laney Salisbury has several of the Myatt forgeries at her website.

Provenance is available at Jackson Street Books and other fine Independent bookstores.

As always, books ordered here will have a freebie publishers Advance Reading Copy included as a thank you to our blogosphere friends.
Posted by Tammy at 5:42 PM No comments: