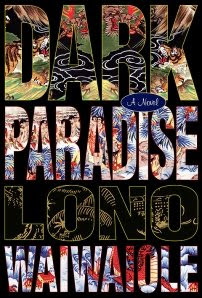 Faithful readers will know, when I recommend crime fiction, it's the good stuff. Dark Paradise by Lono Waiwaiole (Dennis McMillan, $35) is one of the best of the season. I've been a fan of Lono's since the Wiley series, that were set in Portland, OR. The ending of Wiley's Refrain says "you got to get back to the islands brah". Lono took that to heart and this fast-paced novel is the result of his moving to the big island just as a major meth ring was busted. This dark view of vacation paradise won't be welcomed by the tourist board, but fans of crime noir should rejoice.

Mexican distributors from California have decided to take over the meth trade from the established Japanese, and this has brought the attention of the FBI.

We meet Geronimo Souza, dedicated cop, unfaithful husband and over eager gambler. He knows and is related to many of the local drug dealers. Geronimo wants to minimize collateral damage he knows will come to pass.

Nanali has had to navigate dangerous waters all her life. When her mother was killed by her father, Dominic Rosario, she became the woman of the house at 13. Nanali watches the events and players and believes she is strong enough to step up and take her father's place. Buddy Kai and Sonnyboy Akaka want to keep their share of the action.

Chapters switch between the viewpoints of the characters giving different shifting angles as the battle and retaliations stack up. The Big Island isn't that big where everyone has known each other since grade school.

Lono has a fine ear for the local pidgen and uses it effectively throughout the novel. He has been a high school basketball coach during his teaching years and depicts the teenage scene well here. Well-drawn characters make this a satisfying read, with an ending as sad as the Hawaiian Hymn that closes the book.

Dark Paradise is available from Jackson Street Books and fine indie bookstores everywhere. This beautifully produced volume is a joy to hold.


When Army journalist Marshall Thompson came home from a tour of duty in Iraq, two things were clear to him – the war is wrong and he needed to do something to stop it. Marshall sets off on foot to walk the entire 500-mile length of his conservative home state of Utah in the hopes of getting people talking about war and peace. All along his 27-day journey, Marshall meets other peace-minded Utahans, as well as those who vehemently oppose the idea of a solider calling for an end to war. No matter what your views are on the War in Iraq, A Soldier’s Peace will leave you with something to think about.

Last weekend, our SLgroup tried to host Marshall Thompson's movie, but it turned out to be the day all things Second Life crashed. The movie didn't get aired, but a very enlightening discussion ensued. You can catch up by going to Marshall's website, or watching the Young Turks tomorrow. Check at 25 minutes past the hour, every three hours. But, you will be a better person if you show up and watch the whole hour.

The movie will be re-scheduled so stay tuned!
Posted by Tammy at 11:49 PM No comments:

Gottalaff has part four of her discussion on Gitmo detainee Fayiz al-Kandari up at The Political Carnival. It is not pretty reading. And it is made worse by that these war crimes were made in our name as Americans. That this man can retain any semblance of a sense of humor is truly amazing. I don't think I would have.