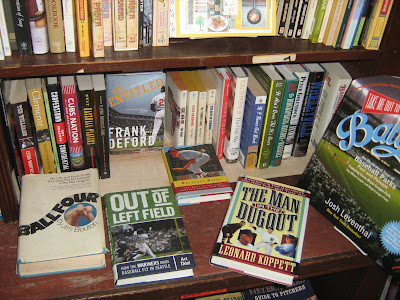 Stepping outside on a crisp autumn day, the sun shines, and you know that the World Series is right around the corner. And there is nothing sweeter to a baseball fan. (For those of you who hate baseball, your long national nightmare will soon be over.) And despite the sour season that this humble book reporter's team, the lowly Seattle Mariners had, (and the equally sour one that friend Dave von E had with his beloved Chicago Cubs) it is a time of year that excites the mind and passion.

And with a hat tip to an old friend and bookseller, Marilyn, who recently blogged about great baseball books, I wanted to point out a few of my favorites. And where else to start but with Jim Bouton's classic account of his season with the Seattle Pilots (a team that played only one season before moving to Milwaukee) Ball Four. At the time his story was controversial. The book named names; it was not a fiction. That was Mickey Mantle with his fellow Yankee teammates atop the Shoreham Hotel, attempting to glimpse through the windows of young, nubile guests! Or his manager, Joe Schultz exclaiming, "Shitfuck! Pound that Budweiser and we'll get 'em tomorrow"! Still the best parts of the book are Bouton's own descriptions of attempting to comeback, throwing a knuckleball to get out Major League batters with a modicum of success, and his relationship with his fellow Pilots, as well as trying to juggle his profession and raising a young family. And recently, I talked about Dirk Hayhurst's chronicle of his minor league career in this book report of The Bullpen Gospels.

Roger Kahn's The Boys of Summer is also classic. In it, he describes his time covering the Brooklyn Dodgers team in the early '50's, followed by interviews with the players as they were in the early '70's. The Dodgers front office at the time hated the book, for reasons best known to themselves. Probably the best of the interview style books, though, is Lawrence Ritter's The Glory of Their Times. Ritter searched the country looking for ballplayers who had played in the early part of the 20th Century, and the interviews he had, which included Sam Crawford, Chief Myers (the Native American catcher and Dartmouth grad who caught Christy Mathewson), Lefty O'Doul among many others, and all of them fascinating. Not just about baseball, but about what life was like in America at that time. Another great inteview book, and broken down by season, is Danny Peary's They Played the Game, which features the baseball careers of 64 different players who played from 1946 to 1964. They played some tough baseball in the post-war era.

Books I haven't had a chance to read yet, but am looking forward to include Jane Leavy's The Last Boy: Mickey Mantle and the End of America's Childhood. If her previous book, Sandy Koufax: A Lefty's Legacy (a biography framed around the perfect game Koufax threw against the Giants in 1965), is any indication, this book should be great. I've also heard wonderful things about Doug Glanville's The Game Where I Stand: A Ballplayers Inside View. Glanville was a good Major League outfielder and I've been told that his writing style is both elegant and poetic.

And I would be remiss if I didn't mention the finest of magazine reporter's, Roger Angell who's articles for the New Yorker were collected in The Summer Game and Five Seasons. In the latter book, in his discussion of one of the greatest World Series ever played, between the Cincinnati Reds and the Boston Red Sox, he leaves us with the following quote about why some of us take this game seriously:

It is foolish and childish, on the face of it, to affiliate ourselves with anything so insignificant and patently contrived and commercially exploitive as a professional sports team, and the amused superiority and icy scorn that the non-fan directs at the sports nut (I know this look -- I know it by heart) is understandable and almost unanswerable. Almost. What is left out of this calculation, it seems to me, is the business of caring -- caring deeply and passionately, really caring -- which is a capacity or an emotion that has almost gone out of our lives. And so it seems possible that we have come to a time when it no longer matters so much what the caring is about, how frail or foolish is the object of that concern, as long as the feeling itself can be saved. Naivete -- the infantile and ignoble joy that sends a grown man or woman to dancing and shouting with joy in the middle of the night over the haphazardous flight of a distant ball -- seems a small price to pay for such a gift.

These baseball titles and many more are available from Jackson Street Books and other fine Independent bookstores.

As always, books ordered here will have a freebie publishers Advance Reading Copy included as a thank you to our blogosphere friends.
Posted by SeattleDan at 10:32 PM 3 comments: 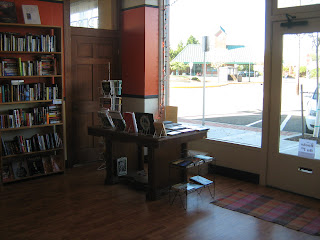 I biked over to open the shop this morning. We're having a glorious week of Fall weather. 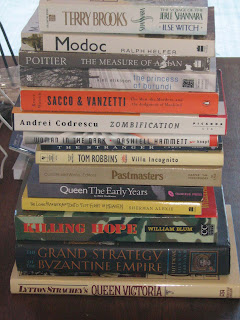 I brought in a new stack of used stock. Since I didn't have any visitors until late in the day, I allowed myself to get pulled into Modoc. What a lovely story! I had read about Modoc in Stewart O'Nan's Circus Fire. I knew she had lead people out of the burning big top, and returned to the flames to save one of her keepers. I didn't know the back story of her life, raised by Gunther, the son of a German elephant trainer, who was born on the same day as Modoc, they are cruelly separated a couple times throughout their lives, but reunited at a Hollywood animal reserve later in life. So many adventures are crammed between that. Shipwrecked far at sea, Modoc saves many of the sailors by keeping them afloat. She & Gunther make it to shore and live in India, at the palatial preserve of Malmout, a worshipped albino elephant. A war between tribal Afghan warlords. Their journey to America, and the many cruel betrayals there make their reunion even more of a tearjerker than those animal/human youtubes we all love.
Posted by Tammy at 6:44 PM 2 comments: