Department of Book Reports: In which the nice book lady cusses

We've been living without a car since Rocky blew up our Cavalier last Thanksgiving. We had bought bikes for fun when we first moved out here, and those became our main mode of transportation for the last 10 months. Sure, it was unpleasant a few times this past winter, biking to the post office to ship out book packages. We were soaked to the bone and had to pedal against 45 mph winds. But we got home, dried off and had some soup to warm up. In more pleasant weather, biking has been a joy, you can stop at anytime to chat with folks walking their dog or stop by the river and watch herons and otters fish for their lunch. We would have missed all that in a car, even at our town's 30mph speed limit. And, I found it even easier and more urgent to talk to folks about getting out of their cars. Overwhelmingly, I'm told "but we have to drive here where I live! You can't get by without a car here!" Well, I'm calling Bullshit today. You can. Not only that, you must. I'm sorry that you're forced into a job that is 40 miles from your house. I'm sorry the nearest grocery is 5 miles away. We may not be able change that right away, but we can change how you get there.

When we hear of Greenland's ice floes breaking up, Russia's unrelenting wildfires, Mountain top removal "enhances the landscape" and that not even completely melted polar caps would convince the deniers, don't even try to tell me the ludicrous lie that the god-damned oil is all gone. 2015 is recognized as the tipping point, and that's less than 4 1/2 years away. Are we going to wait until then to do anything? 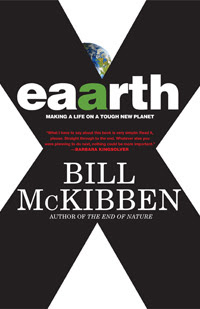 I wrote the first book for a general audience on global warming back in 1989, and I’ve spent the subsequent 21 years working on the issue. I’m a mild-mannered guy, a Methodist Sunday School teacher. Not quick to anger. So what I want to say is: this is fucked up. The time has come to get mad, and then to get busy.

And if he says it's fucked up, it is. But I find hope in the end there: Get Mad, then Get Busy. He has formed a global coalition, 350 (350 being the parts per million CO2 with which we can survive on this planet)

...Those demonstrations were just a start (one we should have made long ago). We’re following up in October -- on 10-10-10 -- with a Global Work Party. All around the country and the world people will be putting up solar panels and digging community gardens and laying out bike paths. Not because we can stop climate change one bike path at a time, but because we need to make a sharp political point to our leaders: we’re getting to work, what about you?

Oct 10, 2010. Will you join up? Sign in and add your name? Write letters? If you need help with crafting a letter, may I introduce you to Warren Senders, who has vowed to write an environmental letter every day, and asks you to steal his stuff and then reword it personally so you can contact your congress critters and senators. Warren reviewed Eaarth far better than I could:
While McKibben is constitutionally optimistic, he gives us some pretty strong medicine:

...no use underestimating the depth of change we'll need to deal with, especially since there's no end point in sight. As we lose the climatic stability that's marked all of human civilization, it's not as if we're going to land on some other firm plateau. The changes to our lives will be ongoing and large and will require uncommon nimbleness, physically and psychologically. Our focus will have to shift. As a culture and an economy, we've had the margin to afford a lot of abstractions. Abstractions in the supermarket aisle: Lunchables, and Cheetos, and the four thousand other incarnations of high fructose corn syrup. Abstractions in our relations with the rest of the planet : "the free world." Abstraction will grow harder; increasingly, we're going to have to focus on essentials: on actual food and on energy that comes from the wind and sun in our neck of the woods, not from that abstraction called "The Middle East."

I've been inspired by the on-going series eKos over on dailykos.com


One stop shopping for information and links in one handy place.

Last week, my cousin Larry gave us a car. A nice little '97 Saturn that will be fairly thrifty. Hoooo-ray!! right? Not really. I find myself kinda guilty and torn about being a car owner again. We have decided we will not become daily car drivers ever again. We are staying on the bikes. But, we will be able to drive to Oly or Seattle to join in the political things we've had to skip this past year. We'll be able to attend local events and meetings that run until after dark. And just maybe, the weather will be bad enough that we'll drive to the post office. But I can gaurantee it won't be very often.

I'll leave you with someone who always gives me hope: Pete Seeger.


Eaarth is available from Jackson Street Books and other fine Independent bookstores.

As always, books ordered here will have a freebie publishers Advance Reading Copy included as a thank you to our blogosphere friends.
Posted by Tammy at 10:38 AM 2 comments: