Department of Book Reports: Charles Jessold, Considered as a Murderer 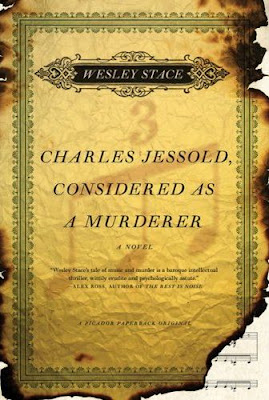 Charles Jessold, Considered as a Murderer by Wesley Stace ($15.00, Picador) We know from page 1 that Charles Jessold returned home to find his wife and a married man in a compromising situation, poisoned them with arsenic and then shot himself on the night of June 23, 1923. Our narrator, gentleman music critic, Lelsie Shepherd tells and re-tells the stories of their early meeting and the years after as he encourages and guides the musical prodigy to compose the greatest English opera, ever. Shepherd is as unreliable as the best of narrators, and reveals more with each telling. Their first weekends in the countryside gathering traditional folk music which was to be the soul of this opera lead to evenings in pubs debating the finer points of music. Shepherd sees the new-fangled atonality as the greatest threat to English music and hates the Germans for their apparent dominance of the opera world. Jessold travels to Germany to study at Bayreuth and is taken up as WWI begins and spends 4 years in an internment camp. He returns to London an alcoholic, and becomes more erratic at his performances. Finally, the opera Little Musgrave is to be staged, but news of the murders come the night before the premiere. It is left to Shepherd to give police statements and hold forth the reputation of his friend against the tabloids and the scurrilous true crime biography a rival has written.
Since I had to correct a typo (thanks, jcricket!) I'll drop in this video I just found.

Stace captures the fine dialog and dry wit of the writing in that time period and gives a musical history lesson along the way. The acknowledgements at the end give you more title selections and sources to pursue. Wesley Stace is a perfect person to write this book as he is also the folksinger John Wesley Harding. I heard about this book a couple weeks ago on our local NPR show Weekday: Music and Murder Most Foul. when Stace/Harding stopped by to discuss the novel and his music.

As always, books ordered here will have a freebie publishers Advance Reading Copy included as a thank you to our blogosphere friends.
Posted by Tammy at 1:04 PM No comments: