The Gaze of the Gazelle 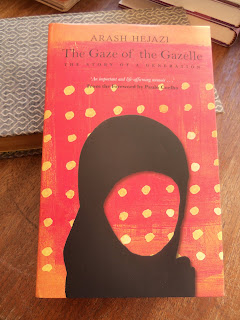 The Gaze of the Gazelle: The Story of a Generation By Arash Hejazi (Seagull Books, $21.95)


At 19:05 June 20thPlace: Karekar Ave., at the corner crossing Khosravi St. and Salehi st.
A young woman who was standing aside with her father watching the protests was shot by a basij member hiding on the rooftop of a civilian house. He had clear shot at the girl and could not miss her. However, he aimed straight her heart. I am a doctor, so I rushed to try to save her. But the impact of the gunshot was so fierce that the bullet had blasted inside the victim's chest, and she died in less than 2 minutes.The protests were going on about 1 kilometers away in the main street and some of the protesting crowd were running from tear gass used among them, towards Salehi St.The film is shot by my friend who was standing beside me.

I saw this message on Twitter. I don't know if it was Saturday for us, or Sunday, but I was riveted. I found and followed people on the ground in Iran. People who have disappeared, and I've not seen them again. I had been reading about the protests, so far away as to be unreal, over there.

And then, I saw the video and I was complicit in this, this insurgence? this revolution? I couldn't know what it was, but this young woman had just died for it and I really should know why. I read as widely as I could on the internet, and we were able to have international discussions in Second Life, but this book is what has opened up the history leading up to Neda's death to me.

Arash Hejazi was the doctor who rushed to Neda's side and tried to stop her life from seeping away onto the street. Here he gives us his family story, interlaced with Iran's history. Originally studying to become a doctor, Hejazi self-published his own novel and then went on to found a publishing company that would ask Paulo Coelho for reprint rights in Iran, which was unheard of for a country under sanctions and embargoes. Coelho accepted and toured Iran, leading to more scrutiny of Hejazi and his bookselling. Their friendship is both a blessing and a danger.

The bravery of the author is the moment he hits send. His co-worker has filmed Neda's death and last breath. His face is clearly seen. They have no battery left on the cell phone to blur his face. They can only send to a couple friends as the internet connections jam and stall.

He types "Please let the world know." and hits send.

This is the book I've been wanting to read since I saw that light slip away from Neda's eyes.

The Gaze of the Gazelle is available at Jackson Street Books and fine independent bookstores everywhere.

I do want to take a moment & talk about the publisher, Seagull Books. I don't know when I have held such fine volumes. 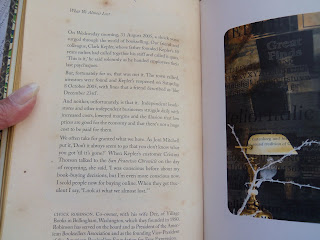 The signatures are stitched(!) stitched! and gathered into fine editions. Our beloved Sales Rep also sent us their catalog. I didn't know that's what it was, and I put off taking it out of it's hermetically sealed baggie. This Silk cloth covered hard cover had pristine Gold Leaf all around. The book is an exuberance from the art department and booksellers, authors and lovers of fine printed matter. I delighted in finding local bookseller's essays included. 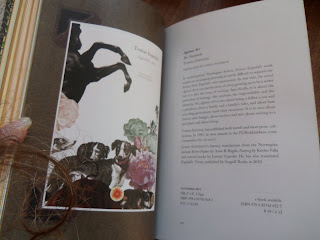 When so many others chose to put their flimsy glossy catalogs online, here is a publisher that proudly prints vital books, about astounding topics, on paper. And makes it look better than it ever did. I look forward to more from them.
Posted by Tammy at 11:47 PM 2 comments: