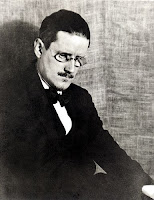 Today marks the 116th birthday of the Irish novelist. Writer’s Almanac has a long biographical essay.

I am, as those who know me can attest, an enthusiast. Many make Joyce out to be more obscure and distant than he really was. My suggestion, if you ever desire to read Ulysses, is to 1. Get a reasonable guide book like Stuart Gilbert’s James Joyce’s Ulysses, or Henry Blaimires The New Bloomsday Book. 2. Keep in mind that most of the book are the thoughts of the character, and like all our thoughts, can be broken, and move quickly from one subject to another; and 3. Read it aloud. Joyce had problems with his eyesight most of his life and wrote very much for the ear. Readings and re-readings of his work are greatly rewarding.

The Jewel Trader of Pegu

To call Jeffrey Hantover’s fine new (and first) novel, The Jewel Trader of Pegu (Morrow $21.95) a historical romance, though it is that, too, is to under value the majesty of his story. This work not only explores life in both Venice, and the capital city of the Mon people, Pegu, located in southern Burma, but also wrestles with the larger issues of our existence. You know, like love, war, and peace.

Written in an epistolary style, Abraham is the eponymous jewel trader. Both orphaned and widowed, he takes the long journey in 1599 from the Venetian ghetto to faraway Pegu at the behest of his adoptive Uncle in order to obtain fine jewels from the Asian continent. He plans to be away only for one year, and then return to his known world of post-Renaissance Italy. He partners with the wise native, Win, and proceeds to accomplish his mission. Once in place, he discovers that it is expected by the Peguan families that their betrothed daughters will sleep with foreign men on the night before the nuptials so as to ensure a blessed marriage.. Abraham struggles as an Orthodox Jew with the idea that he is committing adultery and his own desire to serve his uncle well. Abraham bows to the wishes of the Peguan community, but ultimately he falls in love with one of these girls, Mya, whose husband has died on their wedding night. In his love for her, Abraham finds redemption, liberation and himself.

Beyond the love story itself, there is the political backdrop. Pegu at this time is ruled by a cruel and corrupt King, who as the year passes, makes more and more enemies. Revolt is in the air, and the status of the foreign traders becomes more and more precarious. And then there is also the cultural conflict as Abraham confronts manners and mores that he does not understand, especially with the ideas of Buddhism and stories of the Buddha himself.

Pegu is a real place, now called Baku, and is about 70 miles from Rangoon. At the time of the story it was known for its beauty. It was an important trading center, receiving foreign guests from China, Central Asia as well as Europe. One of Hantover’s achievements is to imagine this place, with all its exotica, well, and make Pegu yet another character.
Posted by SeattleDan at 12:26 AM 1 comment: