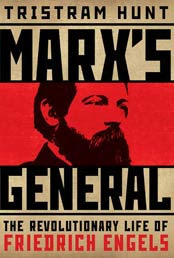 Tristram Hunt's Marx's General: The Revolutionary Life of Friedrich Engels (Metropolitan Books $32.00) is a tour de force of biography. Filled with critical appraisal, keen insight, it is also a remarkable history of the 19th Century.

Hunt takes us on Engels journey as son of a good German burgher, to his youth, filled with the thoughts of Young Hegelianism, his conversion to "Communism", his first shaky meeting with the Moor, Karl Marx, onto his participation in the 1848 European revolutions, and on to his own life as Manchester bourgeois, and his retirement to London. And it is a remarkable journey.

At the center, of course, is the central relationship with Marx. Engels supported Marx and his family most of his adult life. And generously. When you read or hear of accounts of the squalor of Marx's domestic life, always without money, it was not that Engels was not supportive enough; Marx was horrible at managing money. And Marx's family, his wife and daughters, loved Engels, regarding him as a family member. The one serious rift came upon the death of Engel's long-time lover and companion, Mary Burns, and one which was repaired by an apologetic Marx, who never really apologized to anyone for anything.

It is also interesting to see the contrast of their years in England. Engels was occupied with running his father's firm in Manchester, while Marx spent his hours in the British Museum, struggling, and often distracted from writing Capital. And oddly, for a staunch Communist, Engels indulged himself in the life of the ruling class in Manchester, often riding in fox hunts. And at night, Engels was also not just a sexual libertine, he could be an outright Lothario, seducing his "friends" wives.

Which is not to say that Engels didn't have his own intellectual accomplishments. His "Condition of the Working Class in England" was a seminal work of social and political analysis. His nickname, The General, (bestowed upon him by Marx's daughters) came from his fervid interest in military campaigning. He was often published pseudoanonymously for his coverage of the Crimean War, the Prussian-Austrian war, and finally the Prussian victory over the French in Sedan in 1870. Engels knew that he would always play second fiddle to Marx in thought, acknowledging his genius.

Read this book. It is a treat for the mind. And please do not confuse Marx's General with Jesus' General. They are not related.

Marx's General is available at Jackson Street Books and other fine independent booksellers.

democommie was unavailable for comment on this book report.

Cross posted at Jesus' General.
Posted by SeattleDan at 11:14 PM No comments: