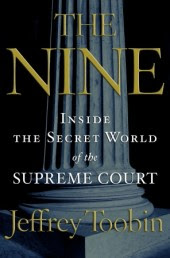 Jeffrey Toobin’s fascinating The Nine: Inside the Secret World of the Supreme Court (Doubleday $27.95) has everything any political junkie could want. With wit, lucidity and clarity, Jeffrey Toobin relates the history of recent Court history, recounts the major cases, and give incisive profiles of the men and women who serve on the court.
The New York Times Sunday review of the book (and I try not to read too many reviews before writing my own report, so as not to influence my own view) emphasizes a favorite Beltway game of guessing who amongst the Justices talked to Toobin. While that may be fun, I have to say, I don’t really care. Even if some of the justices didn’t talk to Toobin, his sources are close enough. I got a very good sense of who these people are, how they think, and what their temperaments are like. From the privately affable Clarence Thomas, to the reclusive David Souter (who learned only in 2003 that there was a Pop group called The Supremes), to the fairly pompous Anthony Kennedy, to the over-the-top Antonin Scalia, the justices are vividly sketched. Front and center among them is Sandra Day O’Connor who, more often than not, was the swing vote on the court. She tried over those years to steer a middle course and prided herself on knowing the pulse of the country. Sometimes she succeeded, other times, not. She played a central role and cast the deciding vote in Bush v. Gore, a decision we get the feeling she truly regretted as her disenchantment with the President and her “beloved” Republican Party grew.
Toobin covers the intellectual history as well, from the liberal Warren court, through the Burger and Rehnquist courts, to the recent Roberts Nine. The rise to prominence of the Federalist Society, a conservative movement begun in the early ‘80’s and championed by Robert Bork and Scalia, has dominated the thinking of many Bush nominees and appointments. The movement itself wanted to undermine the constitutional basis of a strong government; if it isn’t explicit in the Constitution, then it isn’t constitutional. Apparently it is a document that is race-blind and without gender bias. All constitutional questions should be judged by what the founding Fathers intended. So we have a lot of justices now serving who can also read minds. Especially the minds of men dead for two hundred years.
Iraq will be a devastating legacy for the administration. Alas, so will the Supreme Court appointments and the other justices on the lower courts that Bush has installed. It will take years, perhaps decades, to undo what has been thrust upon us. Paraphrasing Toobin, the Conservative agenda of overturning Roe, expanding executive power, speeding up executions, welcoming religion into the political arena and ‘returning the Constitution from its exile since the New Deal’ is within reach. Only Anthony Kennedy could stand in the way and for all his sophistication, he isn’t Sandra Day O’Connor. What a frickin’ mess.

The Nine is available at Jackson Street Books and Fine Independent Bookstores everywhere.
Posted by SeattleDan at 9:28 PM 12 comments:

A Couple of More Thoughts on Threepenny

This is an interesting NYT article on the restoration of G.W. Pabst’s film version of The Threepenny Opera, released in 1931. I saw the film years ago. I hated it. Well, maybe not hate. The scenes with Lotte Lenya were interesting.

One of the perks of attending UCLA was that the film department and its library were incredible. Most Friday nights I attended film showings on campus with my friends, and the showings were usually double bills. On that night I saw Fritz Lang’s great “M”. (Incidentally, Peter Lorre had originally been cast as the Beggar King, Mr. Peacham in the original Berlin stage production, but had to withdraw for some reason I can’t recall.) “M” was shown first, “Threepenny” next and the contrast was remarkable. “Threepenny”, as filmed by Pabst, sucked. And, the linked article shows why. Pabst really didn’t want to make a musical. In any event, the restoration does sound different, and I’ll check it out.
Posted by SeattleDan at 9:38 PM 3 comments:

How to Say Seattle

If it’s Tuesday, it must be street-date for new books! And we received some. First is David Halberstam’s final book, The Coldest Winter: America and the Korean War (Hyperion $35.00). One cool thing happening around this book, is that in certain cities, Halberstam’s friends are standing in his stead for readings. Coming in at over 700 pages, it will prove to the most exhaustive histories of that war. Last year’s phenomenal Suite Francaise prompts more of Irene Nemirovsky’s work to be rediscovered. Fire in the Blood (Knopf $22.00) is her short novel about village life in France before the Second World War. Run (Harper $25.95) is Ann Pratchett’s first novel since Bel Canto. The events of the novel take place over the course of one day and the plot involves the Mayor of Boston who wants his sons to enter the political arena, a thing they don’t want. The work examines the intersections of the well-to-do and the poverty stricken. Richard Russo, author of Empire Falls, returns to small town New York life in his Bridge of Sighs (Knopf $26.95), a saga of intertwined families.

And good stuff in paperback reissues as well! Erik Larson’s chronicle of the unlikely murderer, Hawley Crippen and Guglielm Marconi, the inventor of wireless communication, Thuderstruck (Three Rivers $14.95) evokes the dynamic early years of the 20th Century. Henning Mankell’s The Man Who Smiled (Vintage Crime$13.95) is the latest Kurt Wallender mystery. The Life and Times of the Thunderbolt Kid: A Memoir (Broadway Books $14.95) is Bill Bryson’s story of growing up in the 1950’s. Fans of Alice McDermott should enjoy her latest novel After This (Dial Press $14.00). Finally, Carolyn See’s There Will Never Be Another You (Ballantine $13.95) is a multi-generational novel, involving family reconciliation.
Posted by SeattleDan at 8:10 PM No comments:

Outside Child- my Booksense recommend

Outside Child, by Alice Wilson-Fried (Komenar Press, $25.95 hc, $15.95 pb)
An "outside child" is a child born of an unmarried woman and a married man. In highly class conscious New Orleans, this will still cause problems among the people who are quick to judge and have memories stretching back for generations.
Ladonis is a MBA graduate, now working for a Paddle Wheel Cruise line. When her boss falls over the end of the boat, it may be accidental or suicide. But disturbing ambitions of the rest of the management team cause her to wonder if it was accidental at all. She must rely on her street smart brother HeartTrouble to help her solve this murder.
Alice grew up in New Orleans and uses the city in a way no other author has. Pay attention to the piers along Woldenberg Park. Alice is, to my knowledge, the first African-American voice to tell stories of modern New Orleans. The next book in this planned trilogy will take place during Katrina.
I loved this story and look forward to the next installments.
~Tammy


signed copies are available.
Posted by Tammy at 11:51 PM 4 comments: