Heyday (Random House $26.95) is Kurt Andersen’s long, ambitious, and adventurous novel about that annus mirabilis, 1848. In that year, the United States won its war of aggression against Mexico, revolutions swept Europe, The Communist Manifesto was published, and gold was discovered in California. In this sweep of history, we meet four young people. Ben Knowles is a privileged Englishman, who immigrates to the United States after witnessing the upheaval in Paris early in that year. In New York he promptly falls in love with the actress (and sometimes prostitute) Polly Lucking, and meets her brother Duff, a scarred and troubled Mexican War veteran, and their friend, the cynical Romantic, Timothy Skaggs, once a journalist and now a Daguerretypist.
The plot is simple enough. Boy meets girl, boy wins girl, boy loses girl. Along the way, we meet Walt Whitman, Charles Darwin and Alexis de Tocqueville, among others. We travel from Paris to London, to America and its breadth, encountering the immediate West and beyond to Gold Rush California. There are Utopian communities, rides down the Mississippi, Indians, Mormons, abolitionists, all that mid-Nineteenth century America had to offer. And all the while, Ben is pursued by the French gendarme who blames Ben for the death of the gendarme’s younger brother.
Andersen writes with verve, humor and sympathy for his characters, and that sprawling place we call home. Needless to say that the themes he works on here are the same themes we deal with today. The book is a rich extravaganza in story and ideas. I highly recommend it. It is available at Jackson Street Books and other fine independent bookstores.
Many of you will know Kurt Andersen as the host of the PRI arts and culture program Studio 360. Or you may also know him as the editor and co-founder of Spy magazine. His previous novel is entitled Turn of the Century (Delta $14.95).
Posted by SeattleDan at 6:42 AM 1 comment:

I know this is my Baby Bird! 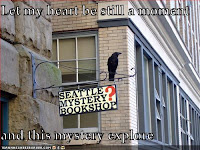 My lovely colleague covered my crow adventures so nicely. A.and I swear, when I say "Baby Bird" to these short-tailed crows, they look at me and walk over. I know I'm anthropomorphizing, but please humor me. This is my Baby Bird!

I knew I had these saved somewhere, just took me a while to find 'em. Any typos are mine.

When I finally caught up with Abraham Trehearne, he was drinking beer with an alcoholic bulldog named Fireball Roberts in a ramshackle joint just outside of Sonoma, California, drinking the heart right out of a fine Spring afternoon.
James Crumley, The Last Good Kiss

You're no angel, you know how this stuff comes to happen: Friday is payday and it's been a gray day sogged by a slow ugly rain and you seek company in your gloom, and since you're fresh to West Table, Mo., and a new hand at the dog-food factory, your choices for company are narrow but you find some finally in a trailer court on East Main, and the coed circle of bums gathered there spot you a beer, then a jug of tequila starts to rotate and the rain keeps comin' down with a miserable bluesy beat and there's two girls millin' about that probably can be had but they seem to like certain things and crank is one of those certain things, and a fistful of party straws tumble from a woven handbag somebody brung, the crank gets cut into lines, and the next time you notice the time it's three or four Sunday mornin' and you ain't slept since Thursday night and one of the girl voices, the one you want the most and ain't had yet though her teeth are the size of shoe-peg corn and look like maybe they'd taste kind of sour, suggests something to do, 'cause with crank you want something, anything, to do, and this cajoling voice suggests we all rob this certain house on this certain street in that rich area where folks can afford to wallow in their vices and likely to have a bunch of recreational dope stashed around the mansion and goin' to waste since an article in The Scroll said the rich people whisked off to France or some such on a note-worthy vacation.
Daniel Woodrell, Tomato Red
Posted by Tammy at 8:41 PM 8 comments:

New History Books for This Week

New arrivals are of the historical kind. Jay Winik’s mammoth study of the early years of the Republic, The Great Upheaval: America and the Birth of the Modern World 1788-1800 (Harper $29.95) and brings together such figures as George Washington, Thomas Jefferson, Catherine the Great, Robespierre, Napoleon and Selim III, sultan of the Ottoman Empire.
The companion book to Ken Burns’ new seven-part documentary, The War, set to debut on September 23rd, is now available. Another mammoth opus, the book, published by Knopf at $50.00, this work focuses on the men and women who actually fought the war, in all of its heroism and gruesomeness and is richly illustrated.
The Book Thief (Alfred Knopf for Young Readers $11.99) is now out in paperback. Very well reviewed when it was published last year, it is a novel about young Liesel Meminger, a foster child, who tries to eke out a living in wartime Munich by stealing.

What are you reading?
Posted by SeattleDan at 6:33 PM 4 comments: