Department of Book Reports: The Backlash 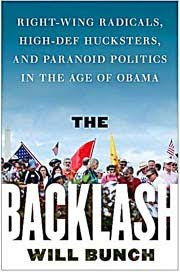 With Glenn Beck and his minions marauding around D.C. this weekend, I wanted to point out a new book by Will Bunch entitled The Backlash: Right-Wing Radicals, High-Def Hucksters and Paranoid Politics in the Age of Obama (Harper $26.00). The book will be released on Tuesday, August 31st, so I haven't had a chance to read it yet. However, I know and loved Bunch's previous book, Tear Down This Myth: The Right-Wing Distortion of the Reagan Legacy ( Free Press $16.00).

I am very anxious to read this book. It will be available, of course, at Jackson Street Books and other fine Independent bookstores.

As always, books ordered here will have a freebie publishers Advance Reading Copy included as a thank you to our blogosphere friends. 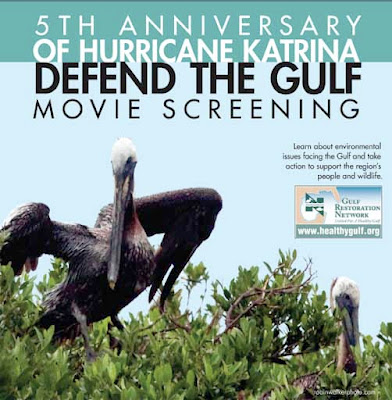 Five years ago, Hurricanes Katrina and Ike highlighted the importance of protecting the environment in order to protect communities. Louisiana’s natural lines of defense – barrier islands, swamps, and wetlands – disappear at the rate of one football field every 45 minutes, leaving communities more vulnerable to future storms. Now, BP’s crude is clearly making matters worse. Gulf Restoration Network is working with event organizers throughout the country to build a nationwide call for a commitment to restoring and protecting the Gulf.

We'll be screening the movie at Lacamas Hall in Second Life, Monday 5pm (PDT or SLT) one of nearly 200 similar events throughout the country, locals will come together in support of the Gulf of Mexico’s people, places, and wildlife to commemorate the 5th anniversary of Hurricane Katrina. Catastrophic wetlands loss leaves New Orleans and other coastal communities more vulnerable to hurricanes like Katrina, and now BP’s oil disaster continues to impact an already imperiled ecosystem.

Defend the Gulf Movie Screening and Discussion, featuring a compilation of short films designed to educate and inspire that includes the world premier of “Terrebonne,” a family drama set in Louisiana's swamps, a hilarious mockumentary by the creator of Mr. Bill, the compelling and award-winning home by Matt Faust, GRN's Gulf Tides series covering the BP oil disaster, and more.
For more info: www.healthygulf.org
Posted by SeattleDan at 12:08 PM No comments: