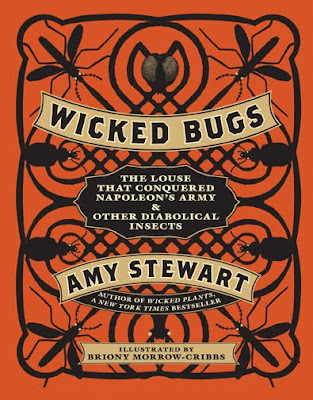 Wicked Bugs: The Louse that Conquered Napoleon's Army and other Diabolical Insects by Amy Stewart (Algonquin Books, $18.95) This handsome little volume matches Wicked Plants, Stewart's book that I reported on a while back. Algonquin Books of Chapel Hill is one of those presses that produce beautiful and fascinating books. They are a joy to touch and hold. 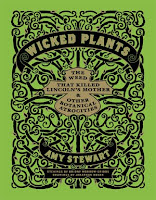 Bugs! They're everywhere! It's estimated there are over one million species of insects, and perhaps ten quintillion insects alive on the planet right now. As this public service announcement shows, there are probably bugs in your house right now!

Stewart sets out over 100 bug biographies, in her disconcertingly cheerful stories. I love how she lets the basic story speak for itself, which will have you sneaking a look over your shoulder and scratching.


Do wicked bugs include spiders and other noninsects?

In this case, yes. An entomologist will tell you that the term "bug" refers to a subset of insects in the order Hemiptera that has piercing and sucking mouthparts. But most of us use the word to describe any number of tiny slithering and crawling creatures, and that's how I'm using it here. Spiders, worms, centipedes, slugs, and scorpions all made it into the book.

Yikes! did you know there are stinging caterpillars that can kill you? There are 6 kinds of bugs that could be eating your books right now? (The best cure for that, from Desiderius Erasmus the Dutch humanist, "books, to be saved from the worms, must be used.") 9 inch centipedes! After reading about the lice, flies, worms, and midges that can infest the human body, I scarcely shuddered at the spider chapters.

I highly recommend this to all armchair Nature enthusiasts, and your niece/nephew, who has odd science fixations... You'll both love it!

Wicked Bugs and Wicked Plants are available at (Jackson Street) Books On 7th andfine Independent bookstores everywhere. Visit us on Facebook Jackson Street Books.
Posted by Tammy at 12:20 AM No comments: