Department of Book Reports: Baseball in the Garden of Eden 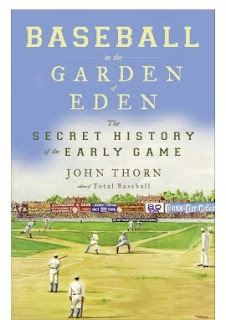 Once again Spring is here, and with it, Baseball Season! And Baseball, always the sport that lends itself best to good writing, has a new treasure in John Thorn's Baseball in the Garden of Eden: The Secret History of the Early Game (Simon and Schuster $26.00). For years, John Thorn has been the leading historian of the National Pastime and has quite recently been named Official Historian of Major League Baseball. Here he examines Baseball's earliest days, and it is quite a story, really.

For years the "origin" story has been the long debunked one of how Abner Doubleday, at age 20, laid out a diagram of the playing field in Cooperstown, New York, in 1839. Despite the fact that Doubleday himself was 1. actually attending the West Point Academy at the time; 2. Never once in his voluminous writings ever mention that he did invent baseball, or ever actually mention baseball at all. In fact, Thorn shows that the game evolved from any number of bat and ball games that came to America from England, including Rounders, Cricket, One 'o Cat or various "safe" base games. Jane Austen mentions "...base ball...." in a group of outdoor activities in Northanger Abbey, which she wrote in 1798. The other competing myth is that of Alexander Cartwright, a member of the New York Knickerbockers club. Cartwright, in 1845, certainly lent his hand to one of the first existing set of rules for the game as we now know it, but his teammates, Daniel Lucius Adams, William Rufus Wheaton, and Louis Fenn Wadsworth had an equal influence on the development of the game. 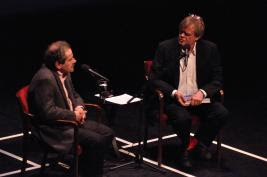 Author and historian John Thorn speaks with Garrison Keillor at the Fitzgerald Theater on March 29, 2011.

Thorn shows how the game, and its popularity, grew with the country at large in the mid-nineteenth century, with gamblers, hustlers, capitalists, and grew into a professional game, suffused with class struggles and racism as well. It's a fascinating history. And none was perhaps more intriguing than the baseball star, turned entrepreneur, Albert Spalding who established the great sporting goods enterprise that still bears his name.

Spalding was convinced that Baseball was a uniquely American invention, having little, if anything to do with English bat and ball games (as was claimed by Henry Chadwick, the British born journalist who was the game's biggest booster in its early days). As one of the sport's leading lights, he called for a Commission to get to the bottom of the game's origins. As it turns out, and Thorn goes into great detail here, Abner Doubleday was one of the leading American Theosophists of his time, Theosophy being one of the spiritual movements of the late 1800's, developed by one Madame Blavatsky, and for whom Doubleday took over as the American head of the movement. And it seems that Spalding's second wife (and previous mistress) was also a leading light in the Theosophy movement in the U.S. Hmm.

This is not only just a fine book on early Baseball, it is also excellent social history of the growing nation. John Thorn is great historian, and a very good writer. Please indulge and enjoy his work. Baseball in the Garden of Eden and other titles by John Thorn are available at (Jackson Street) Books On 7th and fine Independent bookstores everywhere.