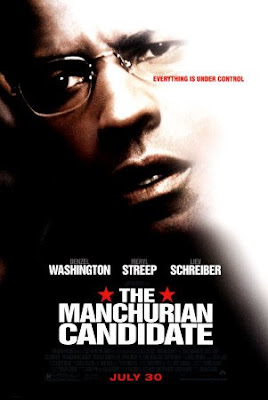 The Manchurian Candidate by Richard Condon (Pocket Books $5.00) Raymond Shaw is the "kindest, bravest, warmest, most wonderful human being in the whole world", or so Captain Bennett Marco and the members of his squad in Korea all believe. And of course, they should. After all, Raymond had saved their lives in battle and had won the Congressional Medal of Honor in the process. But actually no such action ever occurred. The squad had been abducted by Chinese Communists and taken to Manchuria where all the members were "brainwashed" and Raymond himself has been turned into a political assassin. Raymond eventually returns to the States a "sleeper". And a well-connected one at that. His step-father is Senator John Iselin, who knows there are known Communists in the Defense Department. The number of Communists varies from press conference to press conference. But urged on by Raymond's mother, Senator Iselin is a risng star and headed for big things.

I read Richard Condon's The Manchurian Candidate (Pocket Books $6.99) many years ago. And in re-reading, I was reminded of how a good writer Condon, who also wrote the Prizzi novels, was. His dialogue was riveting. The descriptive passages were so good that some of it ended up as part of the screenplay (The line Frank Sinatra has, "Raymond isn't hard to like. He's impossible to like" comes from one those passages). His characaters were vivid; Raymond's mother is one of the most evil persons in literature. And the plotting is meticulous.

The Manchurian Candidate is one of the most paranoid novels of the Cold War, or any period for that matter. It is highly critical of the times wherein the action occurs and in the person of Senator Iselin, freely based on Joe McCarthy, Condon would have us believe that the Anti-Communists of the time were just as bad as the Communists they were allegedly fighting against. It is an extended metaphor for what our country had become in 1959, when the book was published, and a brave one at that. And Condon anticipates the rift between the Chinese and Russian Communists that happened in the early sixties.

I haven't seen the Jonathan Demme remake of the movie from 2004, but the 1962 film version by John Frankenheimer is fine film making. The screenplay, by George Axelrod, the playwright of "Seven Year Itch", is a faithful adaptation of the novel. (The book gives the back story of Raymond's mother,which wasn't essential for the film, and the film suggests the incest that the book makes explicit.) Frankenheimer got great performances from Frank Sinatra (who usually acted at his best with strong directors like Frankenheimer, Zinneman and Preminger), Laurence Harvey, and Janet Leigh. But the best performance, Oscar-worthy, is left to Angela Lansbury as Raymond's mother. (Incidentally Lansbury was only three years older than Harvey who played her son). The movie was shot in black and white which enhances the paranoia of both the plot and the times it portrays.

Read the book. It holds up. See the movie. It more than holds up. The Manchurian Candidate is just one fine political thriller.

As always, a book ordered from this link will have an extra freebie included: I'll find you a really cool publisher's Advance Reader Copy.

Alicia/Idella update: follow as she blogs at ShameTheBanks. She is an important voice speaking to truth.
Posted by SeattleDan at 11:10 PM 1 comment: