Department of Books Reports: The Paranoid Style in American Politics

In an on-going series about the Paranoid Style in American politics in the American novel, this report will look at one of the classics in cold-war literature, Fletcher Knebel and Charles W. Bailey II's Seven Days in May (Harper and Row, 1962, a year before the Kennedy assassination, and out-of-print).

Set sometime in the early 1970's, the book has a fairly straight forward plot. The President of the United States, Jordan Lyman, with the consent of the US Senate, has conducted a disarmament treaty with the Soviet Union. The Treaty is regarded as near-treason in Pentagon, where Colonel Martin "Jiggs" Casey works as an adjutant to the Chairman of the Joint Chiefs of Staff, one General James Mattoon Scott. Over the course of about 24 hours, Jiggs, through such innocuous clues as a betting pool on the Preakness, an encounter with an old military friend who unwittingly discloses the existence of a secret army base outside El Paso, and discovering that his boss has been lying to him on other matters, begins to suspect that there is a military plot to take over the government of the United States. Col. Casey takes the information to President, and though his story is dismissed by other advisers to the President, an investigation ensues and over the next few days, the plot is discovered to be real and plans are made to thwart it.

One of the first of a series of political thrillers to be published, the book operates in a cold-war era. The Russians are not to be trusted. Communism is the greatest external and internal threat to the United States. And the question asked consistently is who will protect our national security when it seems that the Executive wont. At least not to the satisfaction of the Military. It was also a period of what appeared to be a highly political military. The character of General Scott appears to have been modeled on such Generals as Edwin Walker, Curtis LeMay and Douglas MacArthur. Walker,the apparent object of an assassination attempt before JFK by Lee Harvey Oswald, and LeMay, the 1968 running mate of George Wallace, were especially reactionary in their political views, though MacArthur didn't lag far behind.

Seven Days in May was released in a film version in 1964, directed by John Frankenheimer, fresh off of filming The Manchurian Candidate, with a screenplay by Rod Serling, a vehement liberal and starring Kirk Douglas as Jiggs Casey, Burt Lancaster as General Scott and Frederic March as the President. Here is a case where I think the the film may be better. (It's available off and on at the Youtubes). The opening sequence where protesters and counter-protesters to the treaty file past one another until skirmishes between them erupts into a near riot, gives great imagery to the milieu of the times. Serling's screenplay tightens up much of the books plot (Casey is a married in the book, and the family scenes tend to bog down the narrative; in the movie he is unmarried), but still uses the strong and dramatic dialogue that Knebel and Bailey wrote.

The book is, unfortunately, out-of-print. However we do have one copy available and there are, last I looked, about 195 listings for it at abebooks.com. As a political thriller, the book is a fine read; as a movie, it gives cinematic vision to a well-imagined plot. And the central issue remains with us. Should our fears for our national security ever over-ride our Constitution? What happens when megalomania of our would-be defenders becomes the source of undermining our political way of life?

With each order placed through jacksonst-books.com, we'll include a freebie: a publisher's Advance Reading Copy. Mention you saw us here in the "Questions for the Bookseller"
Posted by SeattleDan at 11:06 PM 4 comments:

Cars that go bump in the night 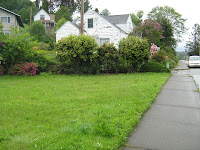 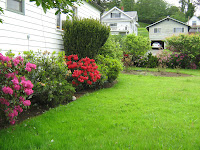 Spring is in the air and it's time to start gardening. These are before shots of the back border.
Cut to 10:50pm last night, Hoquiam police officer at the door, with our neighbor Allie, who's car had a brake failure and took out some of the fence. I figured it was the corner at the main street, which has taken some dings in the past. 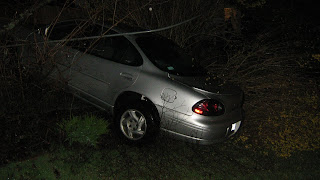 Yikes! The brake failed while the car was parked up hill. No one was in it when it went over, thankfully, no one was hurt. I could tell that half the forsythia was broken off, but I was so glad the car missed the lovely Japanese Maple that turns a brilliant red in the fall. 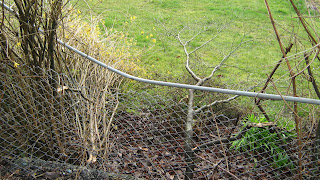 Not so lucky after all. The maple is completely broken off. 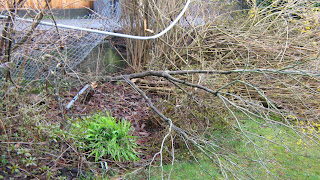 So, today will be spent talking to the police and insurance companies and if the sunshine holds for a couple days I see a chipper/shredder session in my future.
Posted by Tammy at 9:29 AM 7 comments: