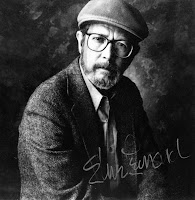 SeattleTammy and I have both been reading Cuba Libre, a 2002 novel by Elmore Leonard which served to remind me what a treasure we have in this great writer. Leonard, who is still going strong at age 85, received his early fame in the Western genre and in Cuba Libre he combines features of the western and the caper novel, the genre for which he has achieved the most recognition. In 1898 Ben Tyler, who has just been released from prison, serving time for bank robbery, joins his friend Charlie Burke in running horses and guns to Cuba. The Battleship Maine has been freshly blown up in Havana harbor, and Spain and America stand at the brink of war. Tyler gets mixed up in the politics of the Cuban insurrection and Spain still trying to keep Cuba in its imperial yoke. Tyler, who has been a cowboy, ends up shooting a rather pompous Spanish officer and is carted off to the stockade to face execution and where he meets Virgil Webster, a survivor of the Maine's demise who has been kidnapped by the Spanish. But Tyler has other plans that don't include getting shot and there is someone who owes him a big debt.

Many of Leonard's books have been filmed, and filmed well. His earlier western, Hombre, starred Paul Newman in a 1967 movie and his short story 3:10 to Yuma has been filmed twice, once just recently. Most of you are probably aware of the caper novels that have been filmed. Mr. Majestyk featured Charles Bronson, Stick had Burt Reynolds, Get Shorty, both John Travolta and Danny DeVito. Most memorably, Rum Punch was directed by Quentin Tarantino as Jackie Brown, and had a wonderful performance by Pam Grier. And it is no wonder why the films are so memorable. Leonard's sense of timing, his adept and humorous dialogue, and his vivid imagery are hard to equal. For instance, take this piece of dialogue from Get Shorty:

Ray "Bones" Barboni: Let me explain something to you. Momo is dead. Which means that everything he had now belongs to Jimmy Cap, including you. Which also means, that when I speak, I speak for Jimmy. E.g., from now on, you start showing me the proper fucking respect.
Chili Palmer: "E.g." means "for example". What I think you want to say is "I.e.".
Ray "Bones" Barboni: Bullshit! That's short for "ergo".
Chili Palmer: Ask your man.
Bodyguard: To the best of my knowledge, "e.g." means "for example".
Ray "Bones" Barboni: E.g., i.e., fuck you! The point is this: is that, When I say "jump", you say "OK", okay?

(Bones was played by Dennis Farina, and Chili, by Travolta. h/t IMDB. Travolta insisted that the screenplay using Leonard's material be used before signing onto the film, instead of a watered down version the studio wanted to use). and

Probably my favorite of Leonard's novels is Swag (aka Ryan's Rules) which featured two armed robbers, one of whom was Frank Ryan, used car salesman, who partnered with an assoicate "Stick" Stickley Jr., a car thief. They successfully rob liquor stores and bars around the Detroit area using these rules:

Always be polite on the job and say please and thank you
Never say more than necessary
Never call your partner by name-unless you use a made-up name
Never look suspicious or like a bum and dress well
Never use your own car
Never count the take in the car
Never flash money in a bar or with women
Never go back to an old bar or hangout once you have moved up
Never tell anyone your business and never tell a junkie even your name
Never associate with people known to be in criminal circles.

There is one terrific scene where the two men are having a drink at local tavern when another armed gunman comes in to rob the place. The two men offer a long critique of the robbers style and technique that is absolutely hilarious.

Elmore Leonard has his own rules for writing, that he published a few years back. Mostly the rules involve trying to make the writer invisible. Leave out the parts that a reader will probably skip anyway. Never use any other verb than "said" when moving the story along and never use an adverb to modify "said", he wrote darkly. Above all, Leonard admonishes himself to the advice that if it looks like writing to him, he re-writes it. Sage advice. If you haven't read him before, you are in for a treat.

We have several volumes available at Jackson Street Books and of course they are available at other fine Independent bookstores.

As always, books ordered here will have a freebie publishers Advance Reading Copy included as a thank you to our blogosphere friends.
Posted by SeattleDan at 11:18 PM 1 comment: