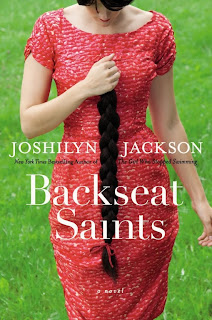 Backseat Saints by Joshilyn Jackson (Grand Central, $24.99)
I've been a fan of Joshilyn's books since the very first one, gods in Alabama. Her first two novels had a wicked humor laced throughout, that will have you snorting inappropriately in public and quite possibly reading passages aloud to whoever happens to be in the room with you.

Lately, her books have taken on tougher subjects, the death of a young girl in The Girl Who Stopped Swimming, and now domestic abuse in Backseat Saints. Joshilyn is a Southern writer of the finest kind, able to weave a story that will leave you amazed at the twists and astounded at the humanness of the characters you come to know and love.

Rose Mae is married to Thom, a golden boy former football star, who beats her often enough to send her to the emergency room 3 to 5 times a year. The attending nurse recognizes all the signs but Rose is unable to see how to break the pattern of being beaten by all the men in her life, beginning with her father just after her mother left the house when she was 9. Rose veers between hating the father who beat her or the mother who was able to leave her daughter behind, without an apparent second thought.

A chance meeting gives us the first lines of the book:

It was an airport gypsy who told me that I had to kill my husband. She may have been the first to say the words out loud, but she was only giving voice to a thing I'd been trying not to know for a long, long time.

As Rose tries to rid herself of the girl who is beaten and re-invent herself as Ivy Rose, she learns the secrets of her mother's departure and her father's remorse. And, somewhere along the way she realizes she cannot be the one who is able to kill, she must become Rose, and perhaps try to continue the mission her mother began, to help other battered women. This is truly a journey worth taking with Rose Mae.

These books are available from Jackson Street Books and other fine Independent bookstores.

As always, books ordered here will have a freebie publishers Advance Reading Copy included as a thank you to our blogosphere friends.
Posted by Tammy at 12:08 PM No comments: